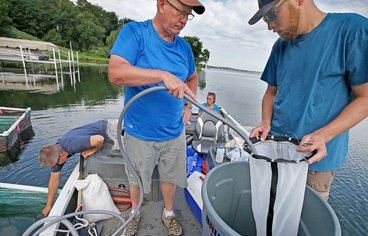 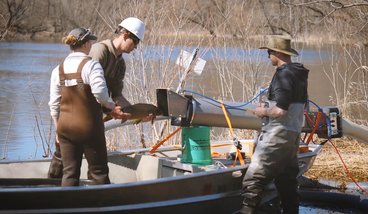 The annual migration of fish presents a unique opportunity for researchers at the University of Minnesota testing a new way to stop the spread of invasive carp. 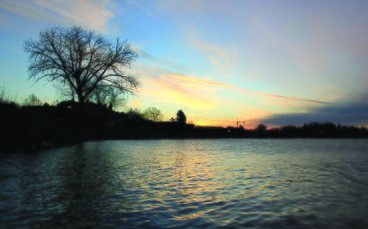 A control research project on zebra mussels is planned for this summer on Lake Minnetonka. The study will begin in early May and will be completed in October, during which temporary lighted buoys will be installed at sampling locations.

The treated area will be in St. Alban’s Bay and the control area will be in Robinson’s Bay. The purpose is to evaluate the use of low-dose copper treatments, under the brand name EarthTec QZ, to manage zebra mussel populations by suppressing their early life stages.

A model created by MAISRC researchers to optimize watercraft inspection checkpoints to prevent the movement of starry stonewort and zebra mussels has now been pilot-tested with three counties: Crow Wing, Ramsey, and Stearns.

The model — a product of another MAISRC project — incorporates estimates of boater movement among lakes within each county and assesses risk of AIS spread based on boater movement and environmental suitability conditions. The model can be used by counties to allocate their limited inspection resources among various lakes and landings. It can help counties decide how many inspectors to hire, where to station them, even what times of days or days of the week they should be scheduled, for the optimal intervention of AIS.

Column: Put time on the water to good use this summer

Get free training to become a volunteer AIS Detector

“So much of Minnesota’s culture and recreation is based around the water and enjoying our lakes and rivers,” says Dan Larkin, an Assistant Professor and Extension Specialist with the University of Minnesota. “And so, aquatic invasive species and other threats to those habitats really affect people personally.” 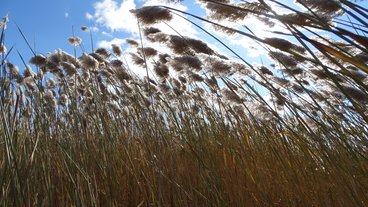 There's still time to stop an invasive grass that's threatening to spread in wetlands across Minnesota, according to some scientists.

The Minnesota Aquatic Invasive Species Research Center is warning the state about invasive phragmites, an invasive strain of wetland grass that grows faster, taller and thicker than its native counterpart.

Boats are notorious for spreading invasive species like zebra mussels.

For the last three years, MAISRC graduate student Adam Doll has been collecting water samples from compartments in watercraft, including live wells, ballast tanks and motors. He then looked for zebra mussel larvae (veligers).

The samples were collected from Lake Minnetonka and Gull Lake, both of which have established zebra mussel populations.