We believe that with the right tools and knowledge we can control and even reverse the spread of aquatic invasive species. The Minnesota Aquatic Invasive Species Research Center uses scientific rigor, an independent voice, and an interdisciplinary team to solve complex problems that start in Minnesota and have national impact. Every day, we see incremental steps lead to big wins— solutions are within reach.

This project directly addresses an identified need for social science-informed management to target the behavioral dimensions of AIS spread via the large and complex baitfish pathway.

This project aims to quantify and clarify whether or not hybrid/narrowleaf cattail removal can increase plant diversity and benefit fish communities in nearshore lake ecosystems and how these effects vary regionally in Minnesota.

Research has shown that carp can be selectively attracted with food to form large foraging aggregations that can be removed with specialized nets with high precision.

This project seeks to develop a system to remove large numbers of invasive common carp during their spawning and seasonal migrations at existing barrier sites in streams in Minnesota.

This project focuses on a novel method of biocontrol for common carp which will complement existing technologies by introducing a synthetic species-like barrier to reproduction.

Exploring whether native pathogens can be used to control AIS

This project is working to identify and evaluate a safe and effective pathogenic biocontrol agent for carp.

This project will develop tools for Minnesota and Wisconsin to assess the economic costs of implementing a range of prevention strategies that will most effectively reduce the spread of aquatic invasive species.

This project will develop a modeling framework for integrating professional and citizen-science data, leading to smarter surveillance and improved estimates of AIS distribution that account for imperfect detection and sampling biases.

This project will optimize field and laboratory methods for maximizing detection probability of AIS from water samples.

This project will provide baseline information about Minnesota residents’ attitudes and risk perceptions toward genetic modification techniques as an approach for managing aquatic invasive species.

Improving the efficiency of watercraft inspections through coordination and cooperation

This project will perform in-lake invader control experiments using a small-scale in-lake experiment to evaluate how native plants respond to invader removal, seed-addition, light availability, and the combination of these factors. It will also analyze monitoring data from hundreds of lake management projects previously conducted in Minnesota over twenty years and develop a publicly available statewide plant monitoring and management database.

Researchers are working to determine the response of native and invasive macrophytes to carp removal in the Riley-Purgatory Bluff Creek Watershed District. They are assessing approaches to promote native plant establishment after carp removal.

This project studied the use of native plants to control invasives in Lakes Riley, Susan, and Staring. Restoration of native plant communities and their impacts on water clarity were also studied.

The aim of this project is to add to our existing database of strain herbicide responses by characterizing several Minnesota strains.

Will property values cool as AIS heat up?

This project seeks to understanding the genetic distribution of Eurasian and hybrid watermilfoil within and among Minnesota lakes and differences in response to management.

This project picks up previous lines of research on removing common carp and restoring the native plant community in the Riley-Purgatory Bluff Creek Watershed District.

This study demonstrates the importance of distinguishing HWM from parental EWM and NWM, as some HWM infested lakes may require different management strategies.

Researchers plan to survey Briggs Lake for C. fluminea on a monthly basis over the winter months to evaluate overwinter survival of the population present in the lake and engage volunteers/community members in the data collection process.

Twenty-eight percent of the 400 yellow perch sampled were infected with Heterosporis. Males were 1.5 times more likely to be infected than females and were more severely infected. The presence of the parasite did not vary with relative weight or age, but infection severity was highest among older individuals that were in better condition. These results suggest that males are more susceptible to infection, and that infection is not associated with maturity or a gape-limiting food source. These results also suggest that Heterosporosis increases in severity with time or by increased exposure.

This project collected and updated field data that can used to better help stop invasive carp while allowing native fish to pass through Mississippi River locks and dams.

This project conducted a risk assessment to prioritize issues and areas for invasive carp management and to reduce the uncertainty about how invasive carp will impact Minnesota’s waterways.

Attracting carp so their presence can be accurately assessed

This project developed ways of using both food and sex pheromones to attract and measure the presence and density of carp using the environmental DNA (eDNA) they release to the water.

Blocking bighead, silver, and other invasive carp by optimizing lock and dams

This project worked to prevent the upstream spread movement of invasive carp by developing a scheme to modify lock and dam structures in Minnesota by enhancing their deterrent properties.

This project will address key gaps in both of these areas through a multijurisdictional research-management partnership between the Minnesota Department of Natural Resources, natural resource managers and wastewater water treatment facility (WWTF) operators in other participating Great Lakes jurisdictions (including states and tribes), and researchers at the University of Minnesota addressing technical needs of WWTFs to transition away from invasive Phragmites.

This project will develop a new method for detecting Phragmites hybrids by leveraging (1) genomic approaches developed for reed canary grass and invasive knotweeds and (2) native and invasive Phragmites samples already collected throughout the state and analyzed using microsatellite markers.

The goal of the project is to support wastewater treatment facilities’ transition away from invasive Phragmites by systematically seeking native Phragmites strains with high dewatering ability.

The overall goal of this project is to assess the impacts of invasive zebra mussels and spiny water fleas on walleye in Minnesota lakes.

This research will provide information on the ecology of starry stonewort, a summary of current stakeholder preferences around starry stonewort management, as well as an evaluation of optimal management strategies.

This research aims to create biologically and economically sound solutions to prevent and control invasive plants and to disseminate scientific information that assists the DNR, watershed districts, lake associations, and citizen groups around the state with management strategies.

MAISRC researchers worked to develop a first-of-its-kind eco-epidemiological model that forecasts the potential risk of spread of zebra mussels and starry stonewort across Minnesota.

Screening for VHS in Minnesota waters

From July 1, 2012 to June 30, 2014 a total of 4,552 fish from 36 bodies of water, eight of which were sampled each year, were negative for the virus. While Minnesota remains free of VHSV, the threats of introduction remain a concern for fish health managers. This study has informed future surveillance strategies, risk assessment, and improved confidence in current management approaches.

The ultimate goal of this work is to understand the multiple pathways through which invasive zebra mussels impact walleye, and to identify factors that make lakes more or less vulnerable to these impacts.

This project will develop methods of RNA-interference (RNAi) to identify genetic weak points in zebra mussels and to develop the tools to manipulate these critical genes as a stepping-stone towards targeted genetic biocontrol efforts.

This project will develop and test a non-toxic, new coating that can mitigate the spread of zebra mussels while minimizing non-target impacts.

This study will test the utility of swath mapping systems such as multibeam sonar for detecting and quantifying the abundance of invasive mussels at a very large scale.

The overall goal of this project is to assess the impacts of invasive zebra mussels and spiny water fleas on walleye in Minnesota lakes.

This project will develop a decision-making tool to help AIS managers, counties, and other agencies prioritize their resources for optimal prevention and intervention of AIS, specifically zebra mussels and starry stonewort.

This project will identify and isolate microbes that are potentially pathogenic to AIS, and evaluate the specificity and effectiveness of potential biocontrol agents in the laboratory.

This study aimed to estimate the relative contributions of different surfaces and compartments on and in recreational boats and trailers to the transport of zebra mussels and their larvae (veligers), focused on measurements of the concentrations of veligers in residual water across a full range of vessel types in Minnesota.

This study evaluated the practicality and effectiveness of a CD3 Cleaning Station vacuum for removing residual water from various recreational boats.

At the St. Croix National Scenic Riverway, researchers collected zebra mussel veliger samples from throughout the riverway and analyzed them to determine population and reproduction dynamics.

This project mapped and shared a publicly accessible genome of the zebra mussel: a powerful tool for invasion biology and biocontrol researchers in Minnesota and worldwide.

Toxicity of antifreeze to zebra and quagga mussels

The goal of this project was to identify the lowest effective dilution of antifreeze at the shortest period of contact time to effectively kill adult and juvenile quagga mussels and juvenile zebra mussels.

The goal of this project was to improve the decision-making process and prevent the spread of AIS by implementing risk-based prevention and mitigation management strategies.

This project developed an early detection molecular assay for detecting and quantifying zebra and quagga mussel DNA in environmental mixtures of the two species.

Creation of survey and monitoring protocols, and development of a research program for studying the effectiveness of zebra mussel pesticide treatment efforts

In partnership with the Minnesota DNR Invasive Species program, MAISRC provided a description of the Pilot Project Program and the application process to obtain a permit for treating newly infested lakes.

This project focused on preventing zebra mussel invasions by developing genetic evidence of spread sources and pathways so that they may be interrupted. It also lays the groundwork for potential biocontrol through genetic modification technologies.

MAISRC researchers are working to develop a first-of-its-kind eco-epidemiological model that will forecast the potential risk of spread of zebra mussels and starry stonewort across Minnesota. 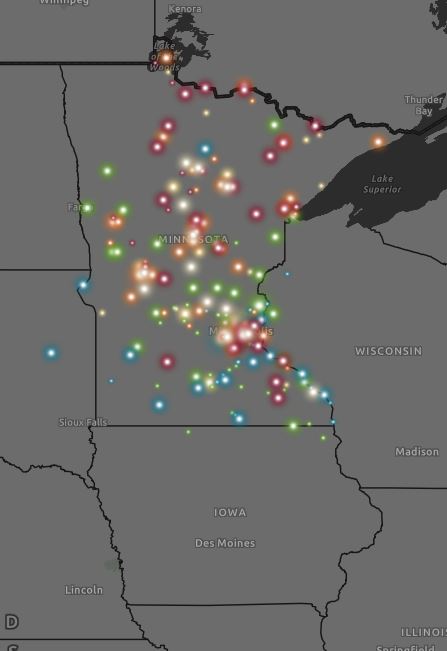