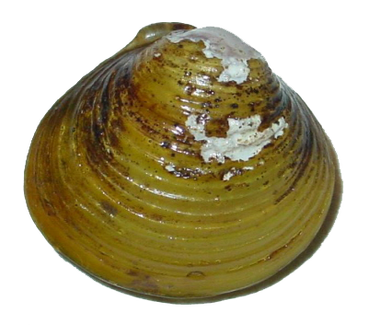 You're never too old or too young to help protect Minnesota's waters from aquatic invasive species. This past August, a new population of golden clams, Corbicula fluminea, was discovered by twelve-year-old budding conservationist, William Guthrie. The new infestation was found in Briggs Lake (Sherburne County) while the Guthrie family participated in Starry Trek, an annual event where volunteers from across the state search for starry stonewort and other aquatic invasive species.

Golden clams have been found in Minnesota in the past, but mainly in rivers where power plants discharge their cooling water—therefore keeping the surrounding water warmer year-round.

The discovery of golden clams in Briggs Lake is significant because it is an inland lake with no supplemental heat source. If the clams can survive our winter months, they could also spread and reproduce in additional lakes and rivers. Similar to zebra mussels, infestations of golden clams can clog water intake pipes and alter local ecosystems.

MAISRC maintains a Rapid Response Fund specifically for situations like this one. The fund is supported by private donations and provides flexibility to our researchers to respond to new invasive species detections outside of our normal research cycle. Last month, we approved a monitoring project at Briggs Lake where researchers will evaluate the overwinter survival of the golden clam population.

MAISRC is dedicated to fighting back against aquatic invasive species. Join us in the fight by donating to our Rapid Response Fund. With your support, MAISRC can continue to serve as a guardian of Minnesota lakes.