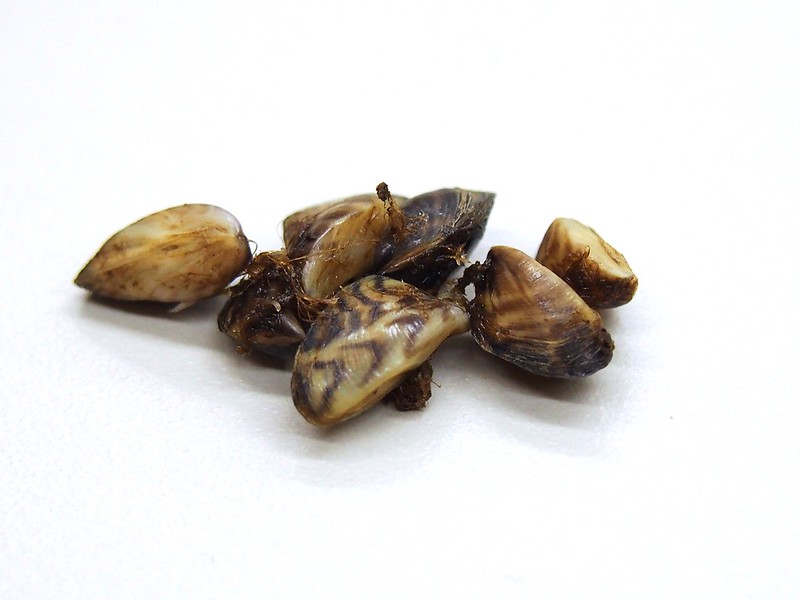 This phase, which is built on the research conducted in Phase I, will identify and isolate microbes that are potentially pathogenic to AIS, and evaluate the specificity and effectiveness of potential biocontrol agents in the laboratory. Work will consist of sample collection and processing, isolation and characterization of potential pathogens, and challenge/infectivity experiments.

Field sampling occurred around the state in 2017 and 2018. Sequence analyses were completed for all samples of native and invasive plants, and results look promising. An experimental setup was designed, constructed, and has been completed to conduct stress experiments on zebra mussels. Zebra mussels were collected from Lake Minnetonka for preliminary survival experiments. The effect of environmental variables (e.g., water temperature, pH, dissolved oxygen, and salinity) on the structure of zebra mussel-associated microbiota will be evaluated during summer and fall. This data will be used for targeted microbe experiments. Microbes that show potential to be pathogenic will be isolated using multiple cultivation strategies, and extensive laboratory screening will be conducted for the desired traits and potential interactions.

Since no natural diseased mussels were available, we opted to develop an experimental model system, which allowed for the application of different intensities of stress – heat (17, 25, 33℃) and salinity (1.5, 13.5 ppt), to promote the proliferation of opportunistic pathogens. High-throughput DNA sequencing of 414 samples (providing 32 million DNA reads) resulted in the identification of several potentially ‘pathogenic’ microbial groups that were strongly associated with ZM mortality. These included Aeromonas, Chryseobacterium, Flavobacterium, Acidaminobacter, Clostridiaceae 1 sp., Rhodobacteraceae sp., ;Acinetobacter, Shewanella, and Clostridium sensu stricto 13. For the identification of EWM-specific microbiota, high-throughput DNA sequencing was performed on 315 samples (46 million reads) derived from leaf and root compartments of EWM and six native macrophyte species. This resulted in the identification of taxa that were significantly enriched in EWM leaves and roots compared to native plants. Though several AIS-associated microorganisms were isolated that could be pathogenic to invasive mussels (e.g. Aeromonas), none of them met our safety requirements for further testing. Future studies must isolate and evaluate the efficacy of ‘host-specific and pathogenic’ biocontrol candidates that will only infect invasive mussel species.

Zebra mussels and Eurasian watermilfoil pose a serious threat to the health, structure, and function of aquatic ecosystems. Microorganisms are closely associated with aquatic invasive species, possibly including harmless commensal bacteria as well as enteric bacteria and pathogens. Some microorganisms have evolved to live in close association with aquatic organisms and such relationships could potentially be exploited to develop microbe-mediated AIS management strategies. This project aims to characterize the total microbial community structures associated with zebra mussels and Eurasian watermilfoil to determine if they contain any potential biocontrols for managing them.

Zebra mussels and Eurasian watermilfoil samples will be collected from several water bodies where there are new invasions, sudden changes of population density, or die-off events occurring. After dissection and observation, DNA will be obtained from all organs and tissues using DNA extraction kits. Water and sediment samples will also be collected near the sites to determine their influence on the microbial community.

In addition to providing valuable information on potential biocontrols for zebra mussels and Eurasian watermilfoil, this study may also allow us to develop molecular marker methods to ascertain the presence/absence of these AIS and quantify their abundance in lakes.

During Phase I, zebra mussels (ZMs), water, and sediment samples were obtained from 15 lakes twice a year, and Eurasian watermilfoil (EWM) was sampled from 10 lakes, once a month for six months. Field samples were processed, DNA extracted and high-throughput sequencing was performed on all field samples using the Illumina platform. Sequencing analysis (188 million reads) showed a distinct clustering of each sample type, irrespective of sampling time and location. Core microbial communities were characterized and several taxonomic groups were identified that were either specific or present in high relative abundance in ZMs and EWM, when compared to sediment and water samples. This gives us a promising lead on microbes to pursue in Phase II of this study, which will evaluate potential pathogenic characteristics and species-specificity of any pathogens. In addition, our results also indicated that EWM was associated with elevated concentrations of fecal indicator bacteria, such as E. coli and Enterococcus. This means that not only are these aquatic plants a nuisance, but they may present a hazard to human health as well, especially if they harbor known human pathogens in addition to fecal indicator bacteria. Overall, the results obtained in Phase I have helped to define the distribution of microbes associated with these AIS, and will be useful for the development of future microbiological control strategies (Phase II).

Water and sediment act as reservoirs for microbial taxa associated with invasive dreissenid mussels. Science of the Total Environment. 2019

Association between submerged aquatic vegetation and elevated levels of Escherichia coli and potential bacterial pathogens in freshwater lakes. Science of the Total Environment. 2019